Back Home About Bulgaria Bulgaria - History and Geography 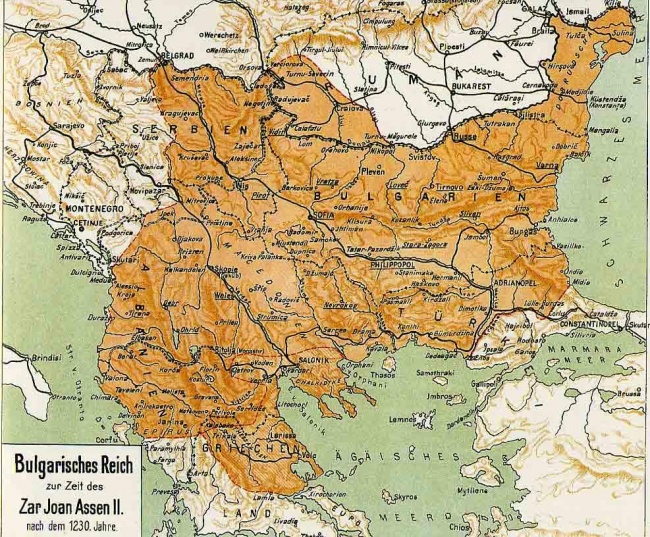 The present territory of Bulgaria has been inhabited since the Stone Age. Archaeological discoveries of that years were find all over Bulgaria. The oldest gold treasure in the world was found near the coastal city of Varna.
In the Bronze Age the Thracians settled there. They were engaged in agriculture and livestock and left evidence of a rich culture. In XI - VI century BC, the first Thracian states were formed and in the First century AC their lands were conquered by the ancient Romans; Later in the V century, their territory was taken over from Byzantium. In the sixth century the Slavs gradually took over the Balkan Peninsula and settled there.

In the second half of the seventh century, in what is now northeastern Bulgaria, the proto Bulgars settled. Later, in alliance with the Slavs, they formed the Bulgarian State, recognised by Byzantium in 681. It was lead by the leader of the proto Bulgars - Khan Asparoukh and for the first Bulgarian capital was declared the town of Pliska.

Under the rule of khan Tervel (700-718) Bulgaria expanded its territory and became a major political force. Bulgarian troops reached the walls of the Byzantine capital Constantinople.
In 864, during the reign of Boris I Mihail (852-889), Bulgarians adopted Christianity as their official religion. With that the ethnic differences between Bulgarians and Slavs were no longer an issue, which then lead to the foundation of an united and strong nation.

At the end of the ninth century Cyril (Constantine the Philosopher) and Methodius created and spread the Cyrilic alphabet. From Bulgaria, the Cyrillic script spread to other Slavic countries, such as Serbia and Russia. The towns of Ohrid and Pliska and later the new capital Preslav became centres of Bulgarian and Slavic culture.

The reign of Tsar Simeon (893-927) is also known as the "Golden Age of Bulgarian culture", furthermore, the country's territory was spread and bordered 3 seas.

In 1018, after prolonged wars, Bulgaria was conquered by Byzantium. During the 1186 uprising, led by the brothers Asen and Peter, the domination of Byzantium was refused. The Second Bulgarian Kingdom was then formed with capital the town of Tarnovo.
Bulgaria's former power was restored during the time of the younger brother of Asen and Peter - Kaloyan (1197-1207), and at the time of Tsar Ivan Asen II (1218-1241) The Second Bulgarian Kingdom reached its greatest bloom, establishing political hegemony in Southeast Europe and expanding its borders to the Black Sea, the Aegean Sea and the Adriatic Sea.
This lasted until the end of the Second Bulgarian Kingdom (1186 - 1396) when Bulgaria was conquered by the Ottoman Empire in 1396. For almost five centuries Bulgaria was under Ottoman rule.
At the mid 19th century, Bulgarians slowly started to uprise against the Ottoman empire. Key figures within the liberation movement were Georgi Sava Rakovski, Vasil Levski, Lyuben Karavelov, Hristo Botev and many other Bulgarians.
In 1876, the April Uprising broke out - the first major organised attempt at liberation from Ottoman domination. The uprising was brutally crushed and drowned in blood, but it attracted the attention of European countries. In 1878, as a result of the Russian-Turkish War (1877-1878), the Bulgarian state was restored, but not entirely. The former Bulgarian territories were divided into three - Principality of Bulgaria with Prince Alexander-Batenberg,  Eastern Rumelia with a Christian Governor appointed by the Sultan and Thrace and Macedonia remained under Ottoman rule.
Later in 1885, the Principality of Bulgaria united with  Eastern Rumelia.

Late nineteenth and early twentieth century was characterised by remarkable achievements in all fine arts. This is the period in which the works of the Bulgarian poets and writers Ivan Vazov, Aleko Konstantinov, Dimtcho Debelyanov, Pencho Slaveykov - the only Bulgarian who has been mentioned as a candidate for the Nobel Prize, created some of the most notable works of this period.

Bulgaria participated in the First Balkan War (1912), together with Serbia and Greece fight for freedom of Thrace and Macedonia. Bulgaria won that war, but in the Balkan War (1913) was defeated by Romania, Turkey and its former allies that split territories inhabited by Bulgarians.
Intervention of Bulgaria in World War I on the side of the Central Powers ended with a national disaster.
In 1918, Tsar Ferdinand abdicated in favor of his son Boris III. The Noy Peace Treaty of 1919 imposed severe terms on Bulgaria, which lost a great part of its territory to the neighbouring countries.
The Bulgarian- Romanian treaty in 1940 returned the South Dobrogea territory back within Bulgarian borders and formed most of the territory, known today as Bulgaria.

In the early '40s Bulgaria lead a policy in favour of Germany. But later, the participation of Bulgarian cavalry units on the Eastern Front was discontinued. Tsar Boris III prevents the deportation and possible killing of about 50,000 Jews.
In August 1943, Tsar Boris III died and the regency of the young Tsar Simeon II formed a government. On the 5th of September, 1944, the Soviet Army entered Bulgaria, leading to forming a governement with pro-Russian leader Kimon Georgiev. In 1946 Bulgaria was proclaimed a Republic and the ancestors of the former Tsar Boris III, including Tsar Simeon II and Queen Maria Luisa were forced to leave the country from the Bulgarian Communist Party, which came into power. All non allied political parties were banned, the economy and the banks were nationalised, privately held land was seized from its owners. Leaders of the ruling Communist party in the following years were Georgi Dimitrov, Vasil Kolarov, Valko Chervenkov, Anton Yugov and Todor Zhivkov.

November 10, 1989 marked the beginning of the democratic changes in Bulgaria. The leader of the communist party back then - Todor Zhivkov were forced to retire. Later in 1991, a new constitution was introduced, political parties were restored. In 1990 Zhelyu Zhelev became president - the first democratically elected President in Bulgaria.
Key priorities of the foreign policy of Bulgaria became membership of the European Union and NATO. As a result of the significant progress of the country it joined the North Atlantic Treaty on 29 March 2004, together with Estonia, Latvia, Lithuania, Romania, Slovakia and Slovenia.

From January 1, 2007, after fulfilling the membership criteria, Bulgaria became a full member of the European Union. As a result, now Bulgarians have equal rights and obligatians as any other citizens of EU countries.