Kranevo is a small resort village, situated in a sheltered bay, 25 km north of the city of Varna. It lies just beyond the northern end of Golden Sands and at the southern part of a long beach, which extends towards the luxurious resort of Albena to the north.
The wide sandy beach, clean sea, gently sloping sea bottom and healing mineral water have propelled the swift growth of the village into a competitive tourist destination.
The majority of hotels are small to medium sized, although there are few large scale complexes being built in the past few years. Kranevo is also famous for its summer camps organized every year. It is known as a resort for small kids, where they go for their vacation - many school camps you can find here. Also, this place would be suitable for those on a budget.

There are a lot restaurants, variety of snack bars, fast food, grill- and toast-bars and various other ways to service the tourists.

Kranevo has succeeded an ancient Roman stronghold, known as 'Ekrene' or the harbour 'Kraneia'.
Traces of the Roman fortress, which was exploited during the Middle Ages as well, have been found on the southern plateaus above the village.

Relatively close to Kranevo is the famous Aladzha rock monastery. In the opposite direction is the town of Balchik with its beautiful palace and Botanic Garden.

The main coastal road passes through the eastern outskirts of Kranevo. There are regular bus services to Varna, Albena and Balchik, as well as private taxis operating 24/7.
The average daily temperature in the summer is around 25°C, making Kranevo a wonderful place for having a rest and fun. The climate is strongly influenced by the sea. The summer is sunny and hot.

Properties for sale in Kranevo 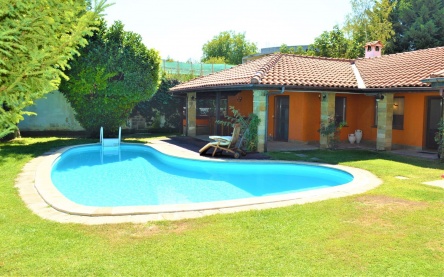 Individual house with swimming pool near beach for sale in Bulgaria